Email ThisBlogThis!Share to TwitterShare to FacebookShare to Pinterest
Labels: Courses

Outline:
Day 1: Sufism - Meaning of the word 'Sufi'; Brief history; Islam & Sufism
Day 2: Sufism in the Sub-continent (with a focus on the Chistia Order)
Day 3: Doctrines & Philosophies of Sufism
Day 4: Sufi Poetry & Music
Sahibzada Asim Maharvi Chishti, born in a Chishti Sufi family, educated in the West, a researcher, writer and columnist is the Chairman of Chishtiya Ribbat Sufi Studies Center in Pakistan. He has delivered lecture on spirituality, comparative religion, spiritual healing and history of civilizations.  As chairman of Sufi Studies Center - http://www.chishtiya.org  -  he has examined, translated and published classical Sufi literature.
Hast-o-Neest,
10 Commercial Building, Shahrah-e-Quaid-e-Azam,
Anarkali crossing, the Mall
or call 042-37-314-316 ; 03008493170
or visit the URL: http://hast-o-neest.blogspot.com/ for further details
No comments: 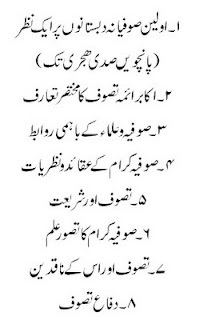 The course starts at Hast-o-Neest
as part of its traditional philosophy progamme.
Duration: 8 classes (2-Months)
Timings:
Tuesdays 5:00 to 6:30 pm
Fee: Rs.2,500 per month
(Free for students if they cannot contribute - Attendance is also open for select sessions)
Hast-o-Neest,
10 Commercial Building, Shahrah-e-Quaid-e-Azam,
Anarkali crossing, the Mall
or call 042-37-314-316 ; 03008493170
or visit the URL: http://hast-o-neest.blogspot.com/ for further details.
No comments:

Email ThisBlogThis!Share to TwitterShare to FacebookShare to Pinterest
Labels: Courses

4 pm this Sunday, 12th June 2011
at Hast-o-Neest,
Raza Naeem
will speak on
The Arab Intifada:
Military Rule or Peoples' Power?
The speaker will address the historical and political context of the peoples' uprisings in Tunis and Cairo and its reverberations throughout the region, including Israel, Palestine, Iran, Lebanon as well as the greater Middle East & North Africa.
The talk will challenge stereotypes of the region which paint it as being dominated solely by Islamist sensibilities, in the context of the West's funding and encouragement of Islamic fundamentalist organizations against Nasserist and communist parties throughout the 1950s and 1960s, thus giving rise to the growth of Islamism.
Raza Naeem is a social scientist presently teaching Political Economy and Middle Eastern History at the Beaconhouse National University and has been a longtime activist of the Communist Mazdoor Kissan Party (CMKP).
He has been trained in Political Economy from the University of Leeds in UK and in Middle Eastern History and Anthropology from the University of Arkansas at Fayetteville, US. He has travelled widely in Egypt and Yemen over the years, interviewing a large number of leftist activists in both countries.
Hast-o-Neest,
10 Commercial Building, Shahrah-e-Quaid-e-Azam,
Anarkali crossing, the Mall
or call 042-37-314-316 ; 03008493170
or visit the URL: http://hast-o-neest.blogspot.com/ for further details.
No comments:


DR. Ejaz Akram on the meaning of Tradition
No comments:

Email ThisBlogThis!Share to TwitterShare to FacebookShare to Pinterest
Labels: Seminar

4 pm this Sunday, 5th June 2011
at Hast-o-Neest,
Traditional Naqshbandi scholar,
Maulana Shahzad Mujaddadi  will speak on and introduce his course: