"One of the most revealing artworks on display was an exercise page written by one of the greatest master calligraphers of from the early 20th century Ustad Abdul Majeed Parveen Raqam (1901-1946). The ustad was also the founder of the famous Lahori Nastaliq script. 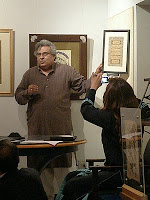 The audience was treated to an exquisite array of rare calligraphic pieces going as far as the 14th century, on the second floor. These were on loan from the by the generosity of Faqir Syed Saif-ud-din. These masterworks provided the perfect backdrop for a series of short lectures that were given by renowned architect Kamil Khan Mumtaz, calligrapher and teacher Irfan Qureshi, and the caretaker of the Faqir Khana Museum Faqir Syed Saif-ud-din. Kamil Mumtaz inaugurated the lectures with his brief talk which focused on the importance of tradition in the modern world. He explained how sacred art offers us a direct connection with God, here and now. While most of our actions in life are performed on a horizontal, or worldly, plane, the sacred presents us with the vertical or the transcendent plane. Mian Iqbal Salahuddin also lent some masterpieces from his private collection by Ameer Khani the leading contemporary master calligrapher of Iran.
Irfan Qureshi lecture started with a brief history of Islamic calligraphy and focused on the specifics of the Lahori Nastaliq script. Qari Khalid Usman recited a verse from the Quran and gave a brief yet enlightening insight into the tradition & art of Quranic recitation. 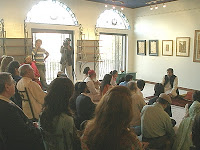 Faqir Saif-ud-din delighted and illumined the audience by giving a detailed history of the rare artworks from his collection.
The most amazing thing about these lectures was that the audience could witness the masterpieces that were being discussed right in front of them, and not just through slides. This method of imparting knowledge is the most successful one as it shows how our entire culture was once steeped in the understanding of its own worldview, not just cerebrally but also experientially. 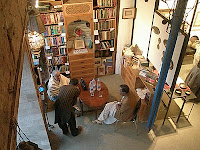 The rare calligraphies on display included works by Abdul Rahim Khan-e-Khana, Akbar’s great general and one of the Nau Ratan’s (“Nine Jewels”) of his court; Mir Imad al-Hassani (17th C) from Shah Abbas’s Safavid court, who was the third great Ustad in the line of those who established the Nastaliq script; Abdur- Rashid Dailimi, of Shah Jahan’s court, appointed as Dara Shiko’s teacher was a student of Mir Imad al-Hassani and so played a pivotal role in bringing Nastaliq to the Sub-continent. Works from the late Muhal and early British Period included those of Mir Ali Harvi, Imam Verdi, Mir Panja Kash and U. Rahim-ullah of Dehli who belonged to a family of Naqqashes (illuminators) and Calligraphers and whose decendant U.Shuja-ul-ullah taught at the NCA and laid the foundation of miniature painting at NCA. 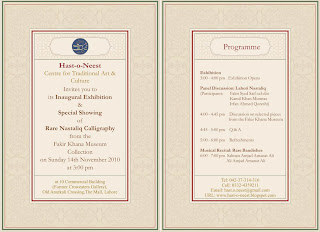