Capitalism & the Crisis of Civilization
by
Dr. Syed Akmal Hussain

“…[the third point in calling this lecture a “crisis” of civilization].. This Economic and Social system is associated with inculcating a particular relationship between human beings  which is very different from the traditional relationship that we have seen over hundreds, thousands of years ..it systematically develops – as Erich Fromm has argued -  aggressiveness in acquisition, competition.. so this aggressiveness is combined with greed…celebrated by economists as greed is what keeps the market functioning…” Dr. Syed Akmal Hussain

He has also recently advised the Federal Government of Pakistan on economic policy as Chairman, Working Group on Institutions for Development, Panel of Economists and as Chairman of the Working Group on Poverty Reduction for Pakistan’s Tenth Five Year Plan.

Dr. Hussain has helped build organizations for overcoming poverty at the village, district, provincial and national levels in Pakistan. These include the Pakistan Poverty Alleviation Fund (PPAF) at the national level and Punjab Rural Support Program (PRSP) at the provincial level.
Apart from a large number of papers, reports and newspaper articles, Dr. Hussain has authored three books on development policy and has co-authored 27 other books on issues of poverty, peace and development, which have been internationally published.

‘Islamic culture displays an undeniable unity which is the result of the spirit and form of the Islamic revelation and ultimately of Divine Unity itself. In the same way that the whole created order is the theophanic reflection of the One in the mirror of multiplicity, so are the various ‘faces’ of Islamic culture so many human echoes of the one Message which is itself beyond the human and which alone bestows upon the activity of a human collectivity the purposes and values which make it worthy of being called a culture in conformity with the noble destiny of man.’
Seyyed Hossein Nasr

Registration Fee: Rs.1000/- ; Student Fee Rs.500/-
Note: Transportation can be provided from Hast-o-Neest Gulberg to Hast-o-Neest Purana Kahna and back at a nominal rate. 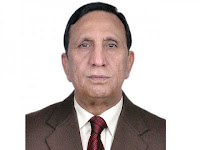 'Allama Iqbal and the Transformation of Religiosity to Spirituality' - Presenter: Dr. Shahzad Qaiser


Dr. Shahzad Qaiser received his M.A. in Philosophy from the University of the Punjab and Ph.D. from Bahauddin Zakariya University, Multan.  He has four collections of Light Essays (Inshaiya) in Urdu.  An accomplished poet of the Punjabi language, he has excelled in the traditional literary genre of Kafi, publishing five volumes of Kafis. He has written numerous books including Quest for the Eternal, Of Intellect and Reason, Metaphysics and Tradition, The Metaphysics of Khawaja Ghulam Farid, Iqbal and Khawaja Ghulam Farid on Experiencing God, the Message of Khawaja Ghulam Farid (rendering Diwan-i-Farid into English prose) and The Metaphysical and Cultural Perspectives of Khawaja Ghulam Farid’s Poetry and Iqbal. Dr. Qaiser is the recipient of the President’s Award for Pride of Performance (Literature) and Sitara-i-Imtiaz (Literature). He has retired as a Federal Secretary and is currently Vice President Iqbal Academy Pakistan, Lahore and Member Punjab Public Service Commission. 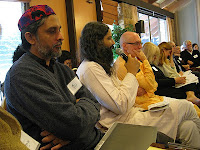 He is a Founding Member of Hast-o-Neest– Centre for Traditional Art & Culture, established in November 2010 in Lahore and Founding Trustee of Baytunur, a trust dedicated to Islamic thought, life & culture established in 2006. 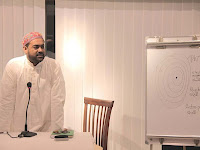 'Introduction to Sufism & the Chishtiyya Tariqa of the Sub-continent' - Presenter: Sahibzada Asim Maharvi
Sahibzada Asim Maharavi, born in a Chishti Sufi family, educated in the West, a researcher, writer and columnist, is the Chairman of Chishtiya Ribbat Sufi Studies Center in Pakistan. He has delivered lectures on spirituality, comparative religion, spiritual healing and history of civilizations.  As chairman of Sufi Studies Center - http://www.chishtiya.org - he has examined, translated and published classical Sufi literature. 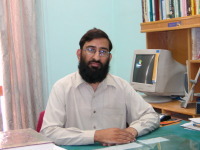 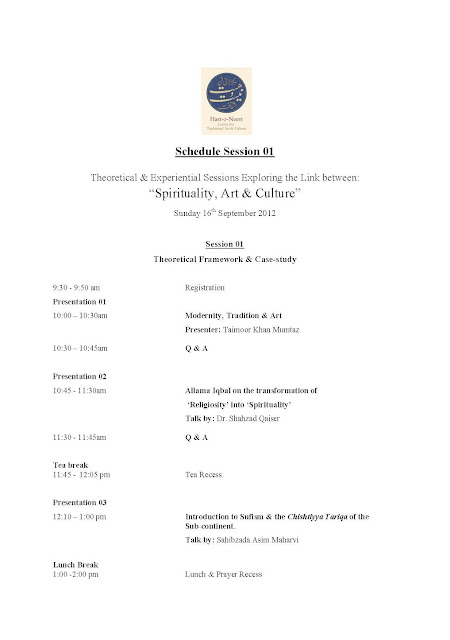 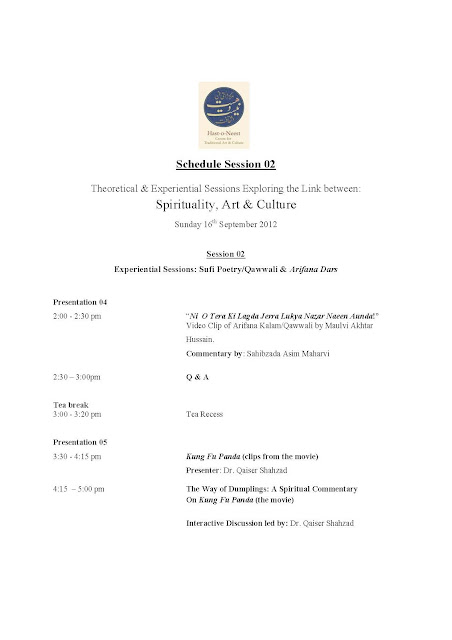 "As the Quran began to be written down on parchment, early calligraphers took to heart one of Muhammad's most famous statements: "God is beautiful and loves beauty." They started early, developing writing styles that enhanced and formalized the 6346 verses and 114 sections of the Quran. The very tools of these early copyists show their careful attention to aesthetics: the angle at which the tip of the writing reed was cut, the care taken in blending inks and curing paper, the use of precious gold to enhance portions of verses, and above all the meditative, near-mystical approach to penmanship that calligraphers adopted in their work -- all combined to create an art of tremendous subtlety and sophistication.

You don't need to read Arabic to see the beauty of this writing, or to see why it would quickly be incorporated into so many other artistic forms. The simple elegance of plain black script circling the rim of a white ceramic plate or bowl speaks for itself and is universal.
In a general museum show of Islamic art, words appear on almost every precious object, from a 12th century Palestinian water pitcher to an inlaid Persian pen case to a small ivory jewelry box carved in medieval Muslim Spain. Calligraphy is the form of forms in Islamic art. But perhaps the most unexpected and universal appearance it makes in Islamic art is in the architecture." Michael Wolfe, Producer, 'Calligraphy is the Islamic Art of Arts', Huffington Post (4/9/2012)

Mystic, philosopher, poet, sage, Muhammad b. 'Ali Ibn 'Arabi is one of the world's great spiritual teachers. Known as Muhyiddin (the Revivifier of Religion) and the Shaykh al-Akbar (the Greatest Master), he was born in 1165 AD into the Moorish culture of Andalusian Spain. Ibn 'Arabi's spiritual attainments were evident from an early age, and he was renowned for his great visionary capacity as well as being a superlative teacher. He travelled extensively in the Islamic world and died in Damascus in 1240 AD.

He wrote over 350 works including the Fusûs al-Hikam, an exposition of the inner meaning of the wisdom of the prophets in the Judaic/ Christian/ Islamic line. [His] extensive writings provide a beautiful exposition of the Unity of Being, the single and indivisible reality which simultaneously transcends and is manifested in all the images of the world. Ibn 'Arabi shows how Man, in perfection, is the complete image of this reality and how those who truly know their essential self, know God. 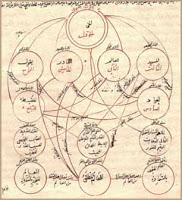 ‘If the believer understood the meaning of the saying 'the colour of the water is the colour of the receptacle', he would admit the validity of all beliefs and he would recognise God in every form and every object of faith.’
Ibn 'Arabi, Fusûs al-Hikam


Considered to be the quintessence of Ibn 'Arabi's spiritual teaching, it comprises twenty-seven chapters, each dedicated to the spiritual meaning and wisdom of a particular prophet. Over the centuries Ibn 'Arabi's students held this book in the highest esteem and wrote over one hundred commentaries on it.